Impact of Coronavirus on Portfolios and the Outlook for Markets

Up until the end of last week, global markets had largely shrugged off the impact of the Coronavirus.  However with news that the virus is now accelerating beyond China, with a outbreaks in Korea, Italy, and Iran, equity markets have experienced a sell-off this week.

The inherently unknowable nature of the Coronavirus is creating global market disruption as demonstrated by the highly disorderly 5% drop in US equities overnight.  In the short term, it is likely we may see further weakness due to ongoing negative news flow, virus case reporting inaccuracies, and extreme information asymmetry.  This imperfect information feeds market volatility as participants are forced to make assumptions about pay-offs given their inability to properly judge them (a situation seen in many previous market downturns).

It should be noted that previous outbreaks over the last two decades have resulted in short-term equity market corrections within a range of 5-15%.  Equity markets have eventually recovered and subsequently gone on to reach new highs in the following years.  The consensus view is that global growth will be down in the first quarter of the year as a result of the coronavirus with the key variable being how long the threat of the virus persists.

While history is a useful guide in this case, it must be said that the effect of this epidemic is likely to be greater given China’s dominant presence in the global economy, given the faster spread of the disease and the measures taken to combat it. The extended closure of Chinese industry, restrictions on people movement, disrupted supply chains, declines in key commodity prices, bans on Chinese travel and the flow-on effect to confidence will severely hamper growth in China and the countries and regions most heavily reliant on China.

Obviously, we have been following the virus and its potential impacts closely.  There are four key reasons why we are cautious about making any reactionary changes to client portfolios at this stage:

We will however continue to monitor the Coronavirus closely.  We are heartened by the results of Johns Hopkins University system tracking Coronavirus cases globally that shows the rate of new cases is now in balance with the rate of recoveries.  For your interest, the research is maintained HERE 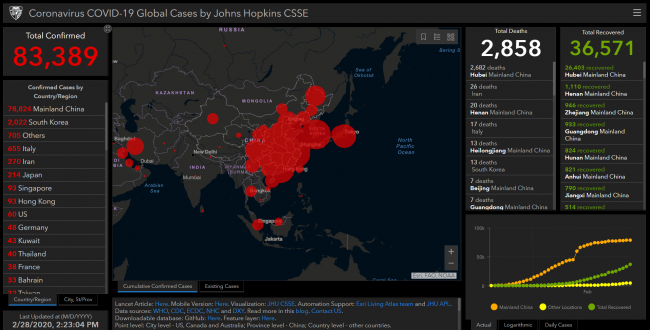 Perspective should also be kept on the past to put the virus’ likely economic impact into perspective. If past is prologue – admittedly a big “if” – the effects on the economy and markets may well prove short-lived.

Looking back at the Severe Acute Respiratory Syndrome (SARS) outbreak, the 2000–2002 recession resulted in comparable policy measures by governments and central banks.  While SARS delayed that recovery by a quarter, it took hold nonetheless.

It is worth recalling the generally inverse relationship between an influenza strain’s ability to spread and its fatality rate. Indeed, to find flu epidemics that are both truly global and highly fatal, we may need to look back as far as the avian flu of 1957–1958 (which killed an estimated 1 million–2 million people worldwide) or the Spanish flu of 1918–1920, which killed about 50 million people worldwide with a fatality rate as high as 20% among those infected.1 They are that rare. In comparison, the coronavirus Case Fatality Rate (CFR) fatality rate is currently estimated to range between 1% – 2.5% per person infected.

The more recent SARS and Middle East Respiratory Syndrome (MERS) epidemics provide additional context. While the fatality rate was high for SARS, at 9.6%, less than 8,100 cases (and 774 deaths) were reported.  The fatality rate for the MERS was much higher at 34.5%, it was limited to just 2,500 cases and 861 deaths.

While the coronavirus fatality rate appears much lower, its spread has been faster and wider. The question becomes whether the resulting fear and disruption are justified – especially when we consider that the common flu kills between 12,000 and 61,000 people in the US alone each year (according to the Centers for Disease Control for 2010 forward). With well understood fatality rates in the 0.2% range, the common flu does not inspire the fear (and thus the economic disruption) of its more novel cousins.

It’s also worth noting that the word “pandemic” being thrown around today is likely misunderstood. It only refers to a disease’s ability to spread across regions, not its potential fatality. Perhaps we need a new, broadly understood label that encompasses both spread and fatality rate, to avoid unnecessarily triggering panics.

Other potentially powerful mitigants should also be acknowledged.  First, a vaccine will be developed in the next 12 months (human trials have already begun). Second, there is likely to be an effective anti-viral drug available within 6 months with human trials currently being completed in China.  And, finally, there is evidence that the virus struggles to spread in warmer climates.  There is hope that as with the flu, Coronavirus will fade during the northern hemisphere’s summer season.

Accumulate will keep you updated as the situation evolves and more clarity becomes available.