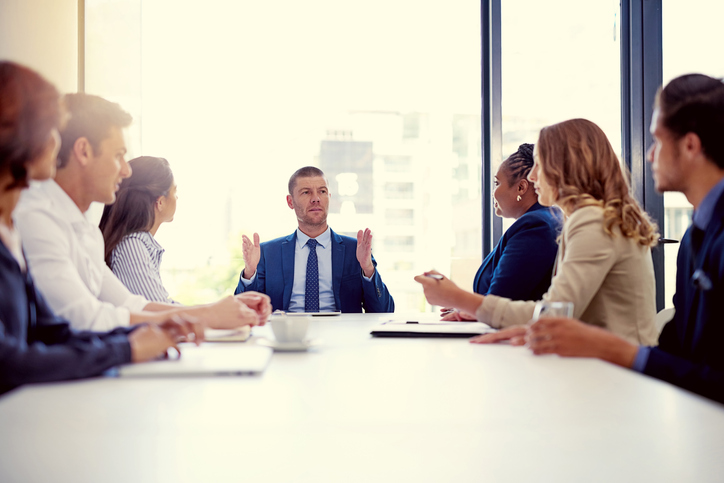 With share markets and economic data dramatically diverging during the past three months due to the impact of the Corona virus pandemic (COVID-19) and government stimulus support, investors are naturally scratching their heads and asking where to from here?

We expect both investment markets and the economic outlook to remain in a state of flux for the remainder of the year given the uncertainties that lie ahead.  Members of the Accumulate Wealth Management Investment Committee recently discussed investment strategies and portfolio positioning.  For more confidence about the future pathway, the key milestones and questions to be clarified can be read below.

Clearly Australia has faired better than most in terms of COVID-19 outcomes, driven partly by the skill of policy makers and politicians, but also by geography, and our relative ease in social distancing when compared to more urban and vertical living conditions, of say, New York or London. (John Hopkins Dashboard)

The key discussion now has moved from flattening the curve to prospects of a second wave. Historically significant epidemiological events have been characterized by multiple phases, for instance the “Spanish” Influenza of 1918-1919. This looks unlikely to be an exception in that regard. (Spanish Flu – National Museum of Australia)

The government response function is evolving however, from lockdowns, which cause such grave mental health and economic outcomes, to controlled shutdowns of local areas where clusters have occurred.

This is primarily driven by an incrementally better understanding of the illness, and its associated death rate, which is lower than was initially feared. In addition, we are slowly refining treatments for the more severe cases of COVID-19 – reviewing the effectiveness of ventilators and intubation. (Ventilators – New Scientist).

We still have much to learn about the virus, how it spreads, and who it impacts, and how to treat, but vast progress is and will be made over the next year or two.

For now, we can expect however that virus case numbers will not be driving markets as much as was the case in March/April, even if a second wave were to materialize. This is probably best surmised by US treasury secretary Steve Mnuchin on the 12th of June 2020, when he said that, “We can’t shut down the economy again. I think we’ve learned that if you shut down the economy, you’re going to create more damage.” (MSN – Steve Mnuchin)

Key Question #2: Earnings and Valuations Look Stretched, But Not in the Context of a Cash Rate of Near Zero.

A great deal of uncertainty still lingers on corporate earnings.

The key barometer for us to gauge how far through the downgrades we sit lies in profit margins.

We previously published this ready reckoner on profit margins and revenues (see figure 1), to estimate earnings impact. On this basis, back in March (What’s the Market Worth?) we thought we might be looking at approximately 30% downgrades to earnings, with a target of net profit margins of 10% at the trough, and a 5% hit to revenues.

We still see 10% as a realistic target for trough level margins, but this will unlikely be reached until July & August or so, as we move into reporting season.

We do note however that the size of the stimulus, and the handling of the economic fall out, has so far been above expectations, so we might be approximately two thirds of the way through.

That projection of 25% peak to trough earnings recession (see Figure 2), which is milder than our initial projection 30% drop, would leave us on a 12 month forward P/E of 19.7x (see Figure 3) as at the end of May. While superficially this seems expensive, we would re-iterate that in the context of a cash rate of 0.16%, it is nothing worse than mid-cycle. 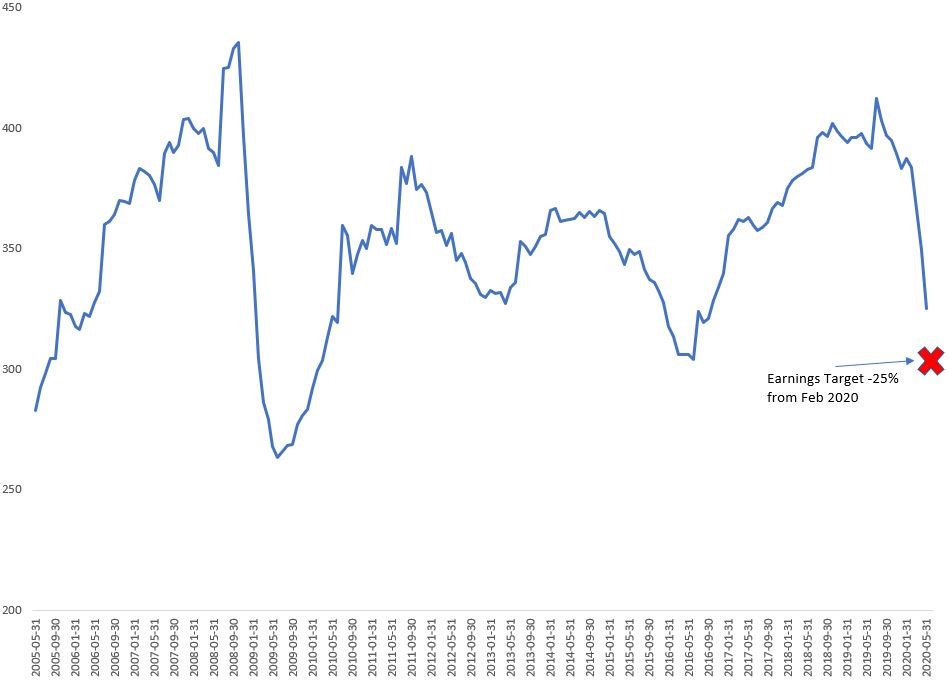 Figure 3: 12 month forward PE – red bar is where the 19.7x 12m forward P/E of the market would be if the downgrades were factored in (source: Refinitiv Datastream IBES, Resonant Calculations) 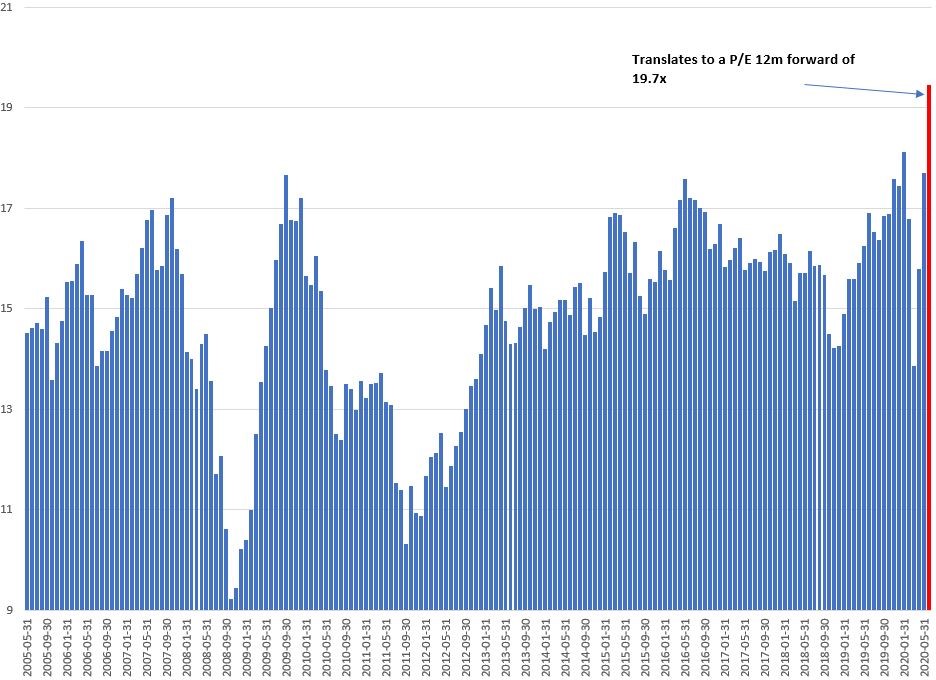 The Government is looking to unwind local fiscal stimulus programs over the next six to 12 months, as the economy re-opens. Fiscal stimulus has successfully in many cases allowed businesses to hibernate successfully through this period.

Globally the US Federal Reserve has drowned out any other global action in terms of the sheer scale and breadth of its support – it has become the only game in town, distorting the US Equity Market (see Figure 4 below, contribution of Federal stimulus around 40% of equity market return over 12 months to May 2020), and driving down the US Dollar.

On our analysis of the US Equity Market, we do see definite signs that the rally is getting frothy, and uniquely and entirely it seems driven by stimulus (incidentally the domestic market has not run as hard, multiples look more sober, and ultimate earnings impact, given the short length of the output gap, should be less pronounced).

For the US Equity market at least; the sugar hit of the April Federal stimulus looks to be running out of incremental puff – the clear message now is we need earnings and the real economy to drive the market higher. That is regardless of how many Federal liquidity interventions occur in between; without a complete lockdown, it will be hard for the Federal to justify much more drastic action to support markets.

This is somewhat of a heightened risk for much else of the global equities landscape, though we feel a bout of US Dollar strength should some of the hot air come out of the US Equity market is inevitable

Figure 4: Breakdown of 12m US Equity Market Return – blue bar is the contribution from monetary stimulus, around an enormous 40% return as at end of May 2020 (source: Refinitiv Datastream IBES, S&P, Resonant Calculations) 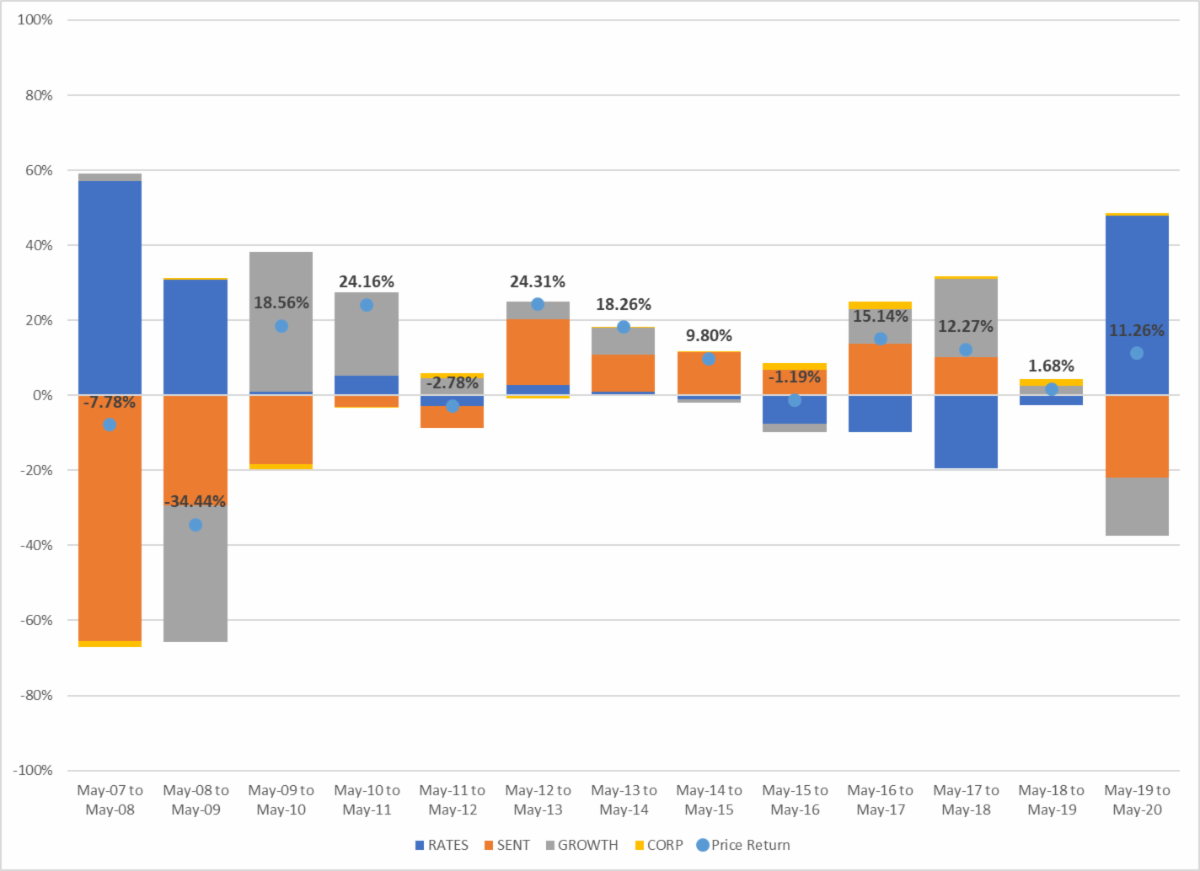 Key Question #4: What is the Outlook for the Consumer? The Fiscal Stimulus Has Been Extraordinarily Effective.

One major topic we are wrestling with is how is the average Australian household going to respond to the crisis on a medium term basis?

Since the end of March, the Government has responded extremely quickly and effectively to stave off the pronounced dip in Consumer spending – with in our view spectacular results.  In amongst the JobKeeper and other fiscal programs is the early release super scheme, which has dramatically increased the spending power of those of working age. The early release super scheme in our view was a well conceived and highly effective stimulus program.

How persistent are these programs and what are the prospects for this to continue?  The early super release scheme has already enabled nearly 2 million Australians to monetise $14.8Bn of long term super savings (https://www.apra.gov.au/covid-19-early-release-scheme-issue-7-accessible-version), at an average $7500, over a 6 week period since end April.  That represents a huge cash injection to individuals at a time when they needed it the most.

As a result, we have already seen some extraordinary sales upgrades for FY20 from selected retailers, including JB Hi-Fi ($500m extraordinary sales since end April), Harvey Norman ($150mm), Wesfarmers ($800mm), which would only represent about 10% of the cash redeemed from superannuation.  At some point this stimulus will peter out and that might impact these retailers hard – but in the short term this has been a very effective means of getting some consumer spending in the economy and bridging the output gap introduced by lockdowns.  As this stimulus has been extended, it promises to continue to deliver a boost to consumption over that period.

In the longer term the economy will face challenges rekindling animal spirits amongst an over-indebted household sector, potentially struggling for employment, and without the incremental activity brought about by persist immigration programs, which have such a positive effect on demand.

Key Question #5 Can Commodities Maintain the Rage? Australian Miners have Some Key Tailwinds, but Not Without Risks on the Horizon

Iron ore has now breached $100 US per ton as Brazilian mine closures restrict supply, and investors anticipate a raft of stimulatory infrastructure spending as occurred in 2009. Mining is one industry where Australia’s handling of the crisis is likely to reap rewards relative to countries less fortunate.

$100 per ton is typically a peak cycle iron ore price since the mining boom ended in 2011, so we do see some risks of mean reversion of coming months. And mean reversion is what the futures market is anticipating, with a futures price around $90 USD at year end (see Figure 5 below)

This would explain why valuations for the iron ore miners remain subdued (RIO 12.9x and BHP 15.2x 12m forward earning), despite iron ore fetching such a hefty premium.

However, margins for producers such as RIO Tinto, BHP and Fortescue have never been stronger, particularly when you consider the comparatively lower cost of wages on the back of an increase supply of available labour.

There are numerous risks around iron ore, however; that China’s investment in hard assets comes in below expectations; that it seeks to pro-actively diversify its source of the raw material away from Australia amongst simmering trade tensions; or that it increases the proportion of scrap in its steel making.